Trade show booth designers have relied on Gatorfoam®, the original heavy-duty graphic arts board, for years as a lightweight, durable substrate for creating reusable exhibit pieces that may be transported cost-effectively from show to show.
In fact, the 20-by-20-foot trade show booth used by the Uniwood®/Fome-Cor® Division of Nevamar Company is created almost entirely out of Gatorfoam, one of the signature products in our Gator™ and Fome-Cor board lines. Ninety-six 12-inch rotating Gatorfoam cubes, decorated with vinyl graphics featuring digitally printed marketing images, are attached to the 18-foot-tall booth’s metal framework.

Gatorfoam is perfect for mounting images (in both dry- and pressure-sensitive operations) for booth display. Exhibit pieces created from Gatorfoam also may be screen printed and painted with any water-based paint system and cut with standard woodworking tools.

While exhibit and promotion pieces generally are constructed elsewhere for trade shows, attendees at PMA 2003, sponsored by Photo Marketing International in Las Vegas March 3-5, got an up close and personal look at printing/finishing processes. Marketing giveaways and display pieces were printed directly on Gatorfoam at the booths of several new digital flatbed printer manufacturers, then cut by automated digital high-speed router systems.

Several printer manufacturers at PMA 2003 exhibited digital flatbed printers capable of printing directly on several products in the Gator and Fome-Cor board lines, including: Gatorfoam, Fome-Cor and JetMount® graphic arts boards. (The JetMount board line was developed specifically to meet the rigors of digital printing and also includes JetPrint Board™, which features a proprietary surface coating that allows the product to readily accept inkjet printing, producing vivid color and high-resolution image quality.)

Following are two unique applications from Durst Dice America, LLC, and Sericol that really wowed the crowds, stimulating booth traffic and generating brand-name buzz for these exhibitors throughout the hall. 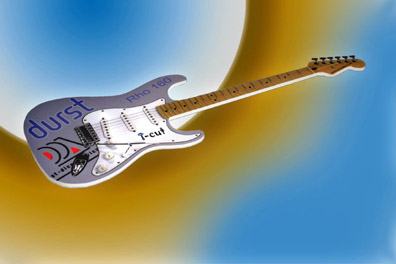 Durst Dice America, LLC. As Rochester, N.Y.-based (DDA) continued its 2002 worldwide rollout of the Durst Rho160 UV flatbed industrial inkjet printer, the company sought an opportunity to showcase the digital printer’s capabilities at trade shows and to demonstrate realistic production workflow. The Durst Rho 160 is a high-performance large-format production inkjet printer capable of outputting directly onto rigid and flexible (roll-to-roll) materials without the need for dye-receptive coatings. The Durst Rho 160 can print panels up to 62 inches wide and 1.58-inch thick.

“We wanted to show our potential customers an inline process with a typical workflow,” said Ryan Fosegan, marketing communications manager, Durst Dice America. “Having the printer without the cutter doesn’t help much. Other companies have a small representation of a cutter in their booths. We wanted to make it as much a part of our booth as the printer.”

DDA originally selected to print money puzzles with both the DDA and i-cut logos as trade show marketing tokens. But they also threw in an image of an electric guitar – due to a DDA employee’s love of playing air guitar.

“Everyone took the guitars,” recalled Fosegan of SGIA attendees. “We had people tell us that their kid loves guitar or they had a basement bar where it would look great.”

DDA chose to print the money puzzles and guitars at SGIA ’02 on 4-foot by 8-foot sheets of 3/16-inch heavy-duty Gatorfoam because the product holds ink well and is durable, according to Fosegan, who said lighter-duty paper-faced foam boards would have been a lower-cost alternative.

“Gatorfoam cuts well and prints well,” said Fosegan. “It’s readily available from a number of suppliers. You get a good bang for your buck.”

Gatorfoam consists of extruded polystyrene foam bonded between two layers of Luxcell®, a sturdy wood-fiber veneer laminate. This unique construction makes Gatorfoam lightweight yet durable, rigid and warp-resistant; its surface also is exceptionally smooth and strong. Gatorfoam cuts cleanly and will not tear, chip or shred.

“Gatorfoam has a harder foam,” says Paul White, of the MGE testing and sales department, “so we can route it and it looks nice. The edges are clean. There’s no cleanup afterward.” 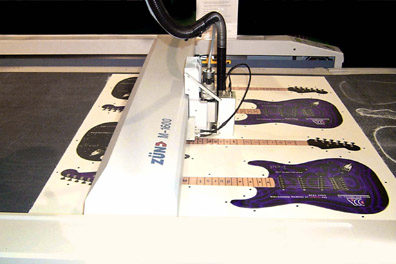 By the time PMA 2003 rolled around the next March, the puzzle giveaways were history. The DDA/MGE team focused strictly on guitars, producing everything from one 7-foot tall guitar to sheets with multiple guitar images ranging from four to 42 inches long. All featured the DDA and i-cut logos.

“We had people literally waiting in line for 15 minutes to get a guitar,” said Fosegan.

DDA/MGE took 2,500 pre-printed guitars to PMA 2003. Those were gone midway through the second day of the show, according to Fosegan, who said they printed and cut another 1,000 guitars to finish the show.

“Every one of those guitars was accounted for,” said Fosegan. “As a marketing aid, they helped to generate awareness of who we are and where we are. They were so popular that a competitor started printing guitars. That’s the highest form of flattery.” 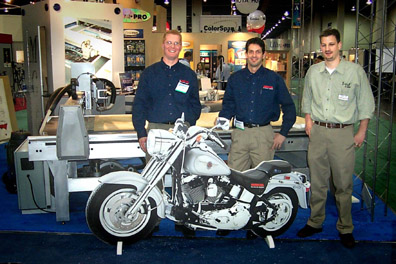 John Davies, digital application specialist at Sericol’s U.S. headquarters in Kansas City, Kan., said the Inca Eagle was used to print a number of small marketing giveaways directly onto various substrates at PMA 2003. But, when it was time to print a two-sided life-sized image of a motorcycle as a cutout standee for their booth, they chose 1½-inch thick Gatorfoam graphic arts board in the 5-foot by 8-foot sheet size.

“Gatorfoam allowed us to showcase the Inca Eagle’s capabilities to print a two-sided, thick, freestanding display piece,” said Davies. “It served as an example of a real marketing opportunity for our potential customers. … Gatorfoam is a thick, rigid material. It worked wonderfully.”

Utilizing UV digital inks from Sericol, a leading manufacturer of UV inks, the life-sized motorcycle image was printed on the Inca Eagle in exactly 3 minutes and 45 seconds in the eight-pass mode, according to Davies. The printed Gatorfoam sheet then was flipped over and printed on the opposite side. The two-sided registration of the image was so close that printing came within 200 microns front to back, according to Davies.

“Printing this image at the show offered us a huge marketing opportunity,” said Davies, “because potential customers could see the application and how simple it was to print. We just laid the Gatorfoam sheet on the bed, hit print and away it went. Less than four minutes later, we peeled it off and it was ready to be cut.”

MGE employees cut feet from Gatorfoam to create a stand for the motorcycle, which was displayed prominently at Sericol’s booth.

“People were very impressed with the motorcycle,” said Davies. “It stuck right out in front of the booth. It really caught their attention.”

Additional information about Uniwood/Fome-Cor’s Gator and Fome-Cor board lines is available by calling (800) 438-1701.